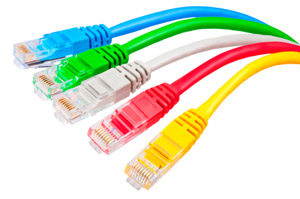 We are often asked “Why CAT6?” After all CAT5e superseded CAT5 because it would support 1000mbps (gigabit) networking so why the need for a higher standard? It is a legitimate question and to fully understand the answer it helps to understand the basics of network protocols.

Put simply, while CAT5e can facilitate the transmission of data packets at gigabit speed, it is limited in the amount of packets it can cope with, resulting in data loss. Because reliable protocols such as TCP resend lost packets this results in the user experiencing a slowdown over the network, for example when opening a large graphics file.

By utilising all four pairs within the cable, increasing the frequency of the twists in each pair and reinforcing the cable with a plastic spine, CAT6 reduces the amount of “cross-talk” that cause this level of data loss.

In other words Cat5e and CAT6 are like two highways with the same speed limit, but the CAT6 highways has many more lanes so traffic jams are less likely. Techies please excuse the over-simplification but as an analogy we think this works!

So who does need CAT6? Certainly anyone rendering large graphics fileS over a network.

Some 3D CAD programmes can produce files measured in gigabytes – such as architects, structural engineers etc. In fact any designers or technicians that work with large files.

Then there is also the issue of future-proofing. There is no doubt that networking has benefited enormously from the increase in data transmission speeds from 10mbps to 100mbps and there is no reason to believe that 1000mbps will not be considered the norm a few years from now.

CAT6 costs about 20% more than CAT5e, so is it worth the extra expenditure if all you anticipate using in future are internet, email and basic documents and spreadsheets.

It is also worth bearing in mind that data will only cross the network at the speed of the slowest network device which means possible investment in gigabit switches and NICs to enjoy the full benefit of gigabit networking over CAT6.

If in doubt about the standard that best meets your particular requirement don’t hesitate to consult us and we will be happy to talk you through the pros and cons and find the option that is right for you.

Contact us to discuss your requirements or to arrange for a Dekko Projects Ltd consultant to visit your premises to conduct a survey. 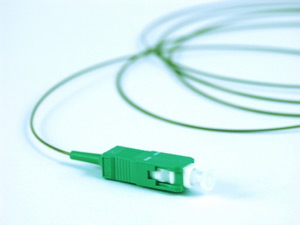 Fibre Optic data cabling uses photons (units of light) to transmit data as opposed to electrical pulses. As a result, high speed and reduced data loss can be achieved over greater distances than with copper cable.

There are two basic types of fibre optic – Single and Multimode.

Single Mode fibre optic cabling is used when even greater distances are necessary – for example when connecting to the much-loved speed cameras that are a feature of our motorways.

Fibre optic cabling can seem very confusing, not least because a number of different standards of cable and connections have evolved over time.

This information is very important when purchasing patch cable to connect from the patch panel to your switch. The patch cable must be the same ie 50/125 as the installed backbone cable. If your switch has different connection however (eg ST or LC) patch leads can be purchased with the appropriate connector at each end.

Multimode can be used to transmit data up to distances of 300m at 1000mbps. Cables can be installed with between 4 and 24 cores to provide multiple links or redundancy (each link requires 2 cores). Patch leads can be supplied on demand.

Despite the introduction of higher performance cabling such as CAT6, CAT6a and CAT7, CAT5e remains the most popular and commonly deployed Ethernet cabling standard.

There are various reasons for this, and why there is a widely held belief that CAT5e is here to stay – at least for longer than its predecessors. The main reason for this is that it supports gigabit networking and so theoretically, if used exclusively with gigabit network cards and switches, will support higher data transfer across the network.

The emergence of CAT6 has facilitated a far more effective platform for gigabit networking due to its decreased data loss, so in reality if there is a genuine requirement for gigabit, then CAT6 is the category of choice.

Gigabit networking is only really relevant when large amounts of data, for example large image files such as 3D need to be rendered across the network. For most business users who require internet, email and access to documents in programs such as Word or Excel, users will rarely benefit from the advantages of gigabit networking therefore CAT5e is an ideal infrastructure.

CAT5e has benefits of its own. It is more economical to install, and moreover it requires less space than the higher diameter CAT6 and is more tolerant of tight bends and therefore easier and faster to install in trunking and where space is limited.

Contact us to discuss your requirements or to arrange for a Dekko Projects Ltd consultant to visit your premises to conduct a survey.